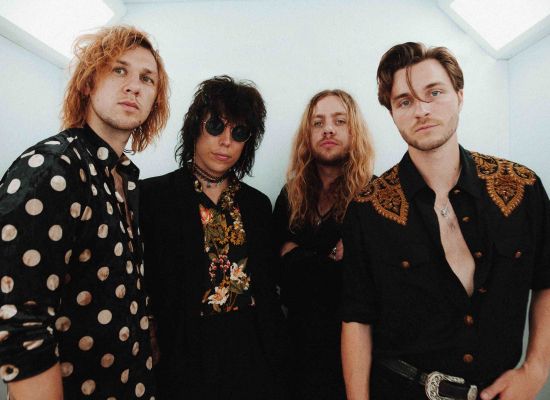 British glam rock maestros The Struts will start their UK headline tour a month from today, kicking off their run of swaggering exuberance with a show at Manchester’s Academy on the 11th October, before a string of seven further dates including London’s O2 Forum Kentish Town.

Lead singer Luke Spiller comments, “Finally we are making our way back to our motherland. Can’t wait for the second tour of the UK this year as it’s sure to be filled with friends, family, and lots of new fans to be made. Grab your tickets now so we can all celebrate and make some brand new memories together. See you all very soon x.”

The tour follows the launch of Harley-Davidson’s global ad campaign for LiveWire, their first all-electric motorcycle, which features the band’s music. In addition, lead singer Luke Spiller rode one of Harley’s motorcycles on stage at their recent headline show in New York City. Meanwhile, on this side of the Atlantic, their recent single ‘Body Talks’ has been used in the trailer for the new series of Strictly Come Dancing.

February saw a triumphant run of shows which garnered rave reviews from the likes of The Guardian, Kerrang, Record Collector, Classic Rock and more, and next month’s tour is only set to be bigger and better. Following the Manchester show, the band will take their attitude-drenched rock to shows in Edinburgh, Sheffield, Norwich, London, Cardiff, Leicester and Bournemouth.

Their most recent album, YOUNG&DANGEROUS, saw the band lauded with praise from both sides of the Atlantic, including from The Washington Times, who proclaimed them “the best rock ‘n’ roll band of the 21st century”.

They have no intention of slowing down either, with further gigs across North America including two huge sold-out shows in Philadelphia at the end of December and a show before their biggest crowd to date – several hundred thousand – at an open-air New Year’s Eve party in Nashville before they head back into the studio to begin work on their third album at the start of 2020.