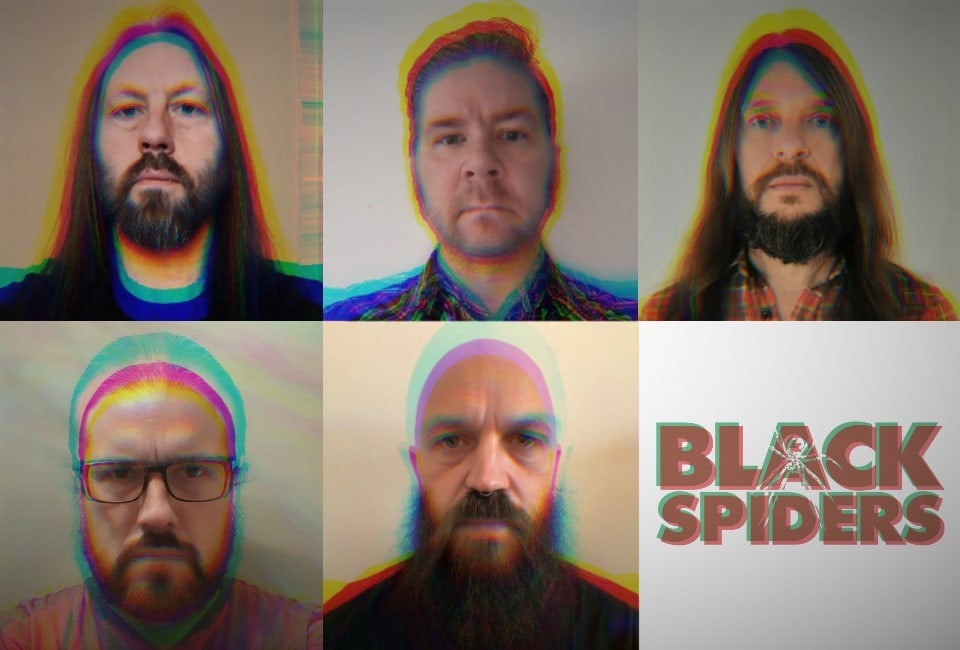 Black Spiders, those trusted and true Sons of the North are back.

This is the first release from Black Spiders in over 6 years and is a welcome return to their much celebrated first releases. In the vein of their biggest hit ‘Kiss Tried to Kill me’ – the new song ‘Fly in the Soup’ is a stadium filler waiting to happen.  Taken from their forthcoming full-length album (as yet untitled, but due to drop early 2021) it’s the tip of the iceberg that is yet to come and squashes any criticism that rock is dead. If it is, then watch out, it’s the start of the zombie apocalypse you were warned about…

“It seemed an obvious choice for the first single,” exclaims frontman Pete Spiby. “It’s classic Black Spiders and a good song to step back into the affray. The sentiment of it is we’re back and here to annoy you, so deal with it…!!!”

Watch the video for ‘Fly in the Soup’ HERE: Be warned. It features an abundance of flies, but no soup.

After waving ‘Tarra’ (with a side order of ‘F**k You’) to an army of loyal fans at some sonically charged final shows (step forward London’s HouseOfVans and Sheffield’s Corporation) the band eventually got the itch for some more loud love in the summer of 2019.

Talks began, a possible return chewed over, loosely planned and enthusiastically embraced…and then slightly scuppered as the world became a very different place.

The band will now include new drummer, Wyatt Wendels of Planet Rock presenter fame, who the band started working with just as the Corona virus hit. The lockdown chips were down! But the creative juices flowed like a pre-pandemic pint at a very hot venue. Sonically epic, core rattling rock was the business of the day…and as it turns out business is good. Swapping files and ideas across the UK, and the Seven Seas (do you follow Tomo on the instas?) and eventually getting some socially distanced studio time, the tracks are now in place and taking shape as the album is almost ready.

“Lockdown was actually a pretty productive time for us, so much energy and positivity. We couldn’t stop writing; it was great to have that inspiration, and that connection again. At the same time, it was a whole new way of working. Usually we would get into the rehearsal room and blast through things, but we had to change and it has given us a lot clarity and more time to demo up the songs from a distance and have new perspective. Same with the studio, as we still haven’t actually played the songs together, in a room, old skool.” – Pete ‘spider’ Spiby

“We were blown away with the love we were shown at our final shows, but we needed a break. We’ve now had some time to think about what truly mattered to us, as a band. Along with any band worth its salt we’re now chomping at the bit to get out and play. Much love to all of our brothers and sisters in the world of music, as well as our amazing fans, we really hope to see you all soon.” – ‘Ozzy’ Lister

It must be remembered that this band have done it all, including highlights: Headlining the Olympic stadium in Beijing!…Coaxing 40,000 people away from watching Biffy, when they headlined the outdoor Jagermeister stage at Sonisphere!… Chosen by Ozzy Osbourne himself from 500 bands to support at his Roundhouse iTunes show!

The new, as yet untitled album will follow 2011s Sons of the North and 2013s This Savage Land. Both lauded, championed, carried shoulder high (usually to the bar) by some of the finest publications in rock n’ roll.

Buy the ‘Fly in the Soup’ single HERE:

In this article:Black Spiders, Fly In The Soup, Hard Rock, new single, Video