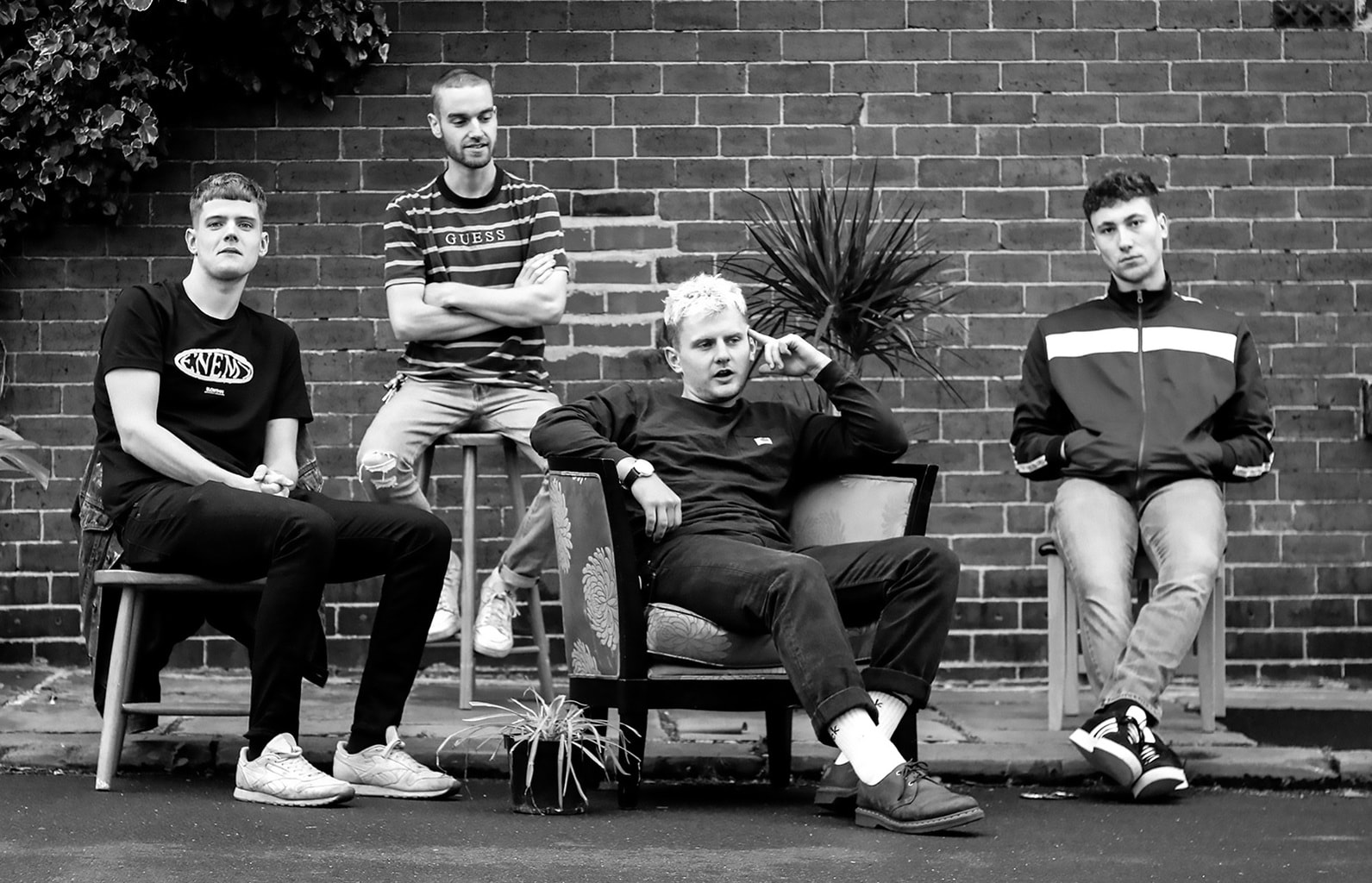 Leeds four-piece FUDGE. have released the live video for YOUR FALL FROM GRACE, the second track from their forthcoming EP, appropriately titled THE TOWN HALL SESSION, the eminent Leeds building where the band recorded the single live.

Described by the band as a “rebellious love song”, Y.F.F.G. is as close to a love song as their style will possibly allow. It’s a more authentic and palpable love song, though, one that is free from the more idealised romanticisms and clichés we are all used to with general rock and pop songs. Y.F.F.G. unearths the less glamorous yet more common aspects of day-to-day relationships and highlights the angst of anticipating the future when you should really be enjoying the present.

FUDGE. are, by their standards at least, more restrained here and it pays off in allowing the narrative to come through and steal your attention. Come the chorus, however, the band provide us with another song which demands the listener get up and move. But with this one you don’t necessarily have to. It’s by no means something you can sit back and relax to; it’s a tune you should sit back and engage with because, chances are, there is something in it that we can all relate to.

The band pride themselves on their live performance which, repeatedly, is eulogised by those who find themselves caught within the chaos of a FUDGE. gig. Their epic live performances have now met head-on with the majestic and iconic venue in which they recorded THE TOWN HALL SESSION. Unfazed by the grandeur of the building, the boys and the team captured their hectic performance in stark polarity to the splendour of the venue. You wouldn’t think to pair the two, but it works.

YOUR FALL FROM GRACE is supported by Independent Venue Week, the importance of which counts more than ever in 2021 because they represent our precious venues, their precious workforces, and the artists who play them whose careers have been so devastated by Covid-19. IVW 2021 is a time to celebrate and support our independent venues, and during the release period of Y.F.F.G. the band have been working with IVW to help remind everyone of the outstanding and stunningly unique venues the entire country has in its arsenal.

CHLOE WARD, director of Independent Venue Week UK, says: “We’re so chuffed that FUDGE. chose IVW 2021 as the time to release their latest single, especially as the unique recording methods behind it align so well with the DIY, independent attitude that so many of our venues and promoters have.”

“Ironically, this anthemic tune merits the money they’ll eventually earn – after all, there’s nothing else they need, as FUFGE. Otherwise have all bases covered …” RECORD WEEKLY

“It’s dangerous, and it’s a long time since I’ve heard anything close to that; the last time a band left me feeling ready to start a revolution was a lifetime ago. You need to go see Fudge play; you must go see Fudge play …” LOCAL SOUND FOCUS

THE BAND’S REFLECTIONS ON YOUR FALL FROM GRACE:

CAM | vocals: “Y.F.F.G. was inspired by life in Leeds, the party scene, getting with girls. Otto came to me with the guitar part, which is quite different from the usual riffs he comes out with. The song is speaking to a girl you’re close to in the present, and about how she may feel in the future. Will all the stupid shit you fill your body with week after week be worth it when you’re older? It says that no matter what happens it should be worth it because you’re in it together even though it’s probably stupid. It was a weird song to write for me because it’s different to our normal stuff and a weird topic, but it’s a fan favourite. It shows a very atmospheric, abstract vibe and I see it as a rebellious love song. The feeling I get from this song is the same as when you’re on your own late at night or early morning; almost surreal. That may sound strange but some of you might get what I mean.”

OTTO | guitar: “I call this ‘the quiet song’. I wrote it whilst someone was sleeping in the same room as me, so I picked something sweet-sounding and played it with compassion. Luckily, the outcome was one of our most palatable songs, for the listener, and honestly one that I never meant to write but am grateful for having written. This is what happens when I don’t get complete free reign on a song and I have to write within parameters.”

ANGUS | drums: “This is our ‘sit back and relax for a minute then let us wake you up again’ song. You also get to hear Cam’s sensitive side which is usually hidden behind his radginess. It feels like this is more of a classic anthem than any riff-based song though, which does make a change for us. It’s also one of our oldest tunes and has stood the test of time in our minds because we aren’t sick of it yet and it remains solidly in our live set. It’s a lot smoother in its ebbs and flows; playing drums to this one is actually quite a relaxing experience because, for once, I can sit back and let the song do the work. For that reason, I feel Y.F.F.G. is bigger than its constituent parts. A bit of a banger in other words.”

“This is going to make your head explode. They’re boisterous boys; they’re extremely good at what they do; their live performances are electric. You’ve got to see them …” BBC INTRODUCING

“Stood atop the beer-soaked bar, arms outstretched like Christ The Redeemer in an Adidas track jacket, Fudge’s Cam begins their headline set by diving into the crowd and clambering onstage, middle fingers held proudly in the air; in terms of chaos and energy, this is only the tip of the iceberg. Like witnessing a hand-grenade being detonated in a bin …” NOUSE MAGAZINE

Prior to the onset of Covid-19, FUDGE. played numerous sold-out shows, including memorable launch nights for their three singles to date; played as main support for both Strange Bones and Kid Kapichi; and performed at Leeds and Reading Festivals and Bingley Weekender. Their previous releases have received huge critical acclaim and were showcased on BBC Introducing and BBC 6 Music. As the latest EP unfolds, you can find them on all major social platforms.

In this article:FUDGE, New EP, Post punk, Video, Your Fall From Grace