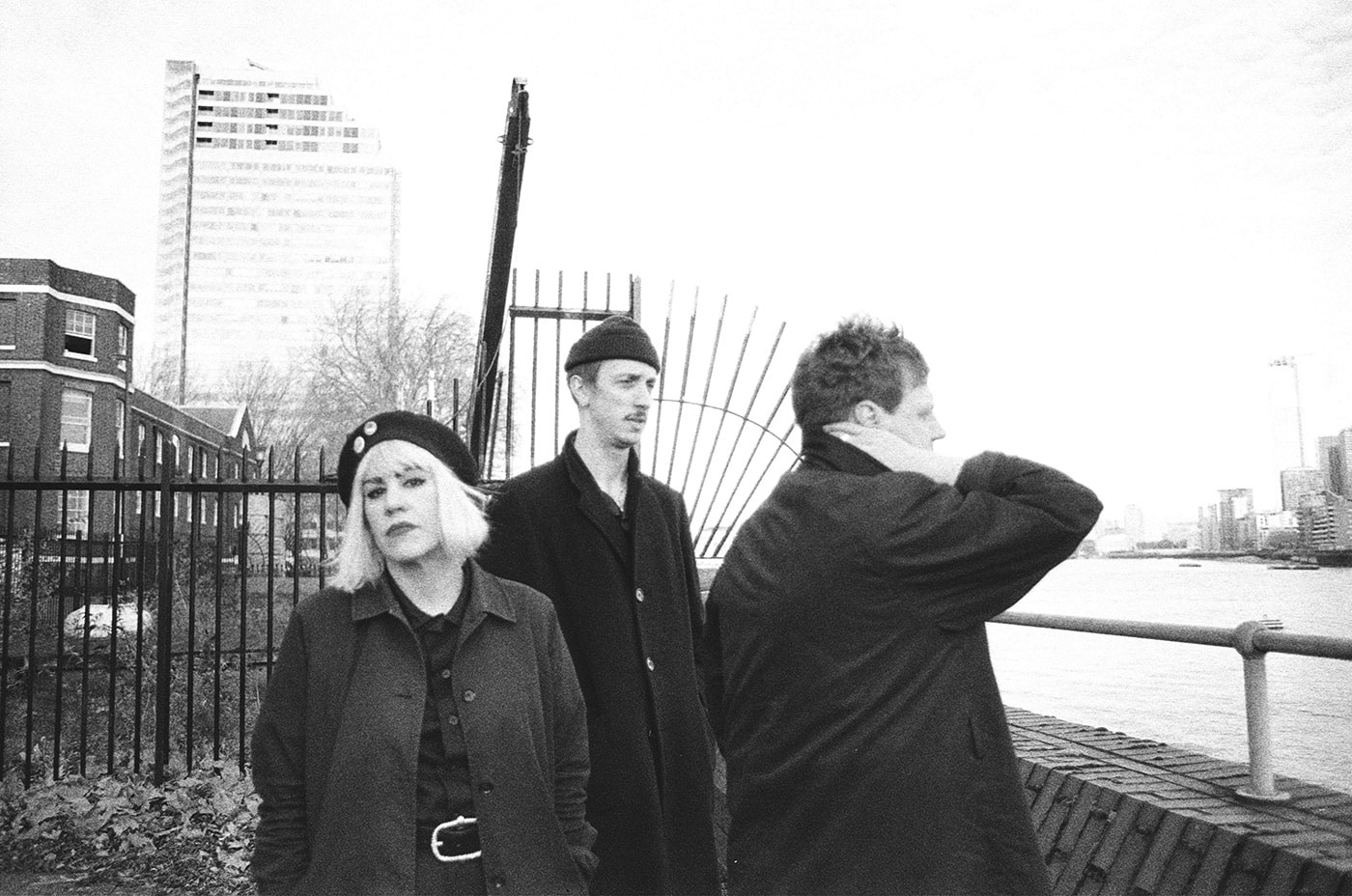 Following a steady stream of ultra-limited 7” singles that were collated together in 2019 for the ‘Pre/Post: A Collection 2016-2018’ on Louder Than War, London trio Girls In Synthesis are finally ready to release their debut album ‘Now Here’s An Echo From Your Future’, set for August 28th on Harbinger Sound. Originally scheduled for release in May and announced with the first bitter taste of ‘Pressure’; one-minute-and-fifty-four seconds of screeching feedback, tribal drums and unbridled rage, as the coronavirus took hold of the world the band made the decision to delay the release of the album. A few weeks on, however, and it feels right to unleash their sonic assault upon the world, returning with another new track, the caustic blast of ‘The Images Agree’, and news of some UK dates in October.

“Visual manipulation, once sense they can impair” Media manipulation has become an art and a tool for people with the wrong intentions to control or mislead the public,” explains vocalist and bassist John on the songs themes. “As this becomes more and more acceptable (or undetectable…) it’s important to question and not blindly accept. As we have seen with the government’s recent lack of clarity and transparency during the current pandemic, a headswim of confusion is created to stop people seeking the truth, not matter how despairing it may be.”

The song features the trademark driving bass and drums, which now forms part of the signature GIS sound. But, on top of this, is unusually dissonant guitar that pulls the listeners focus away from the main melodic and rhythmic elements and towards what could pass as another song altogether. The cutting, abrasive lyrics are dense, even by the band’s standards, and represent the listeners breathless, anxious search for the truth among the lies.

Since forming in late 2016, Girls In Synthesis have quickly forged a fearsome reputation as one of the most exciting and volatile live acts in London. In equal parts frantic, considered, ear-splitting and melodic, the group take their cues from the early DIY punk and post-punk pioneers to keep everything in-house; artwork, videos, performances and recordings are created entirely by the group and their handful of trusted collaborators, under a bedrock of heavy, bludgeoning, dark, post-punk.

‘Now Here’s An Echo From Your Future’ is their first release for fabled experimental punk label Harbinger Sound and finds the band advancing their sound, making subtle but experimental shifts in texture and tone, helping to break free from the shackled straight-jacket of punk rock that, to be fair, never really held them down in the first place.

Across the album’s ten songs, Girls In Synthesis explore a wide range of sensations and sounds as the album detonates into life with opening track ‘Arterial Movements’ in a screeching flurry of over-driven guitar and hammering drums. The contrast between the slow, mesmerising look into aging and dying in ‘Human Frailty’ (‘The realisation that you cannot halt their impending death’), to the aggressive attack on the rise of the right-wing in ‘They’re Not Listening’ (‘The time-old tradition of the right wing accosting desperate working class people has returned’) shows a wide range of subjects and reactions aggressively tackled. Mental health in a fast-moving, unforgiving world, media control, the divide widening between the have and the have nots, the class divide, the blaming of the poor, NHAEFYF bristles with an unforgiving frustration and temper.

The recording of NHAEFYF started at Rockit Studio, Hull in April 2019 during days off on the UK tour to promote the ‘Pre/Post’ compilation album. The Hull sessions were engineered by studio owner and local musician Sean Tomlinson. The remainder of the album was recorded and engineered by the band throughout summer 2019 in a large rehearsal room at Gun Factory studios, Homerton. Production and finishing touches were completed at GIS bassist John’s S.I.C.K Studio in Hither Green. The album was mixed by long-time band collaborator and engineer, Max Walker (currently studying at Abbey Road). The album was mastered by Brett Shaw at 123 Studios, Peckham.

In their few years of existence, fans and critics alike have been stunned by the bands pure visceral and punishing wall of sound, as well as applauding the groups way of making a GIS show an all-inclusive experience; playing from within the crowd to create a unique and awe-inspiring spectacle.

See Girls In Synthesis live at the following dates in October:

‘Now Here’s An Echo From Your Future’ track-listing:

Coming Up For Air

Set Up To Fail

Tirades Of Hate and Fear

Girls In Synthesis are:

Find Girls In Synthesis online at:

In this article:Girls In Synthesis, new album, Video

Halflives (Paris, FR) have released a video for, 'Vibe'. The single which first premiered on Kerrang! Radio follows the band's EP, Resilience, which was...

Halflives (Paris, FR) have released a video for, 'Vibe'. The single which first premiered on Kerrang! Radio follows the band's EP, Resilience, which was...

Will Gould's side-project SALEM return with a new video today bringing a real 80's goth-rock vibe with it. Draculads is taken from the next...