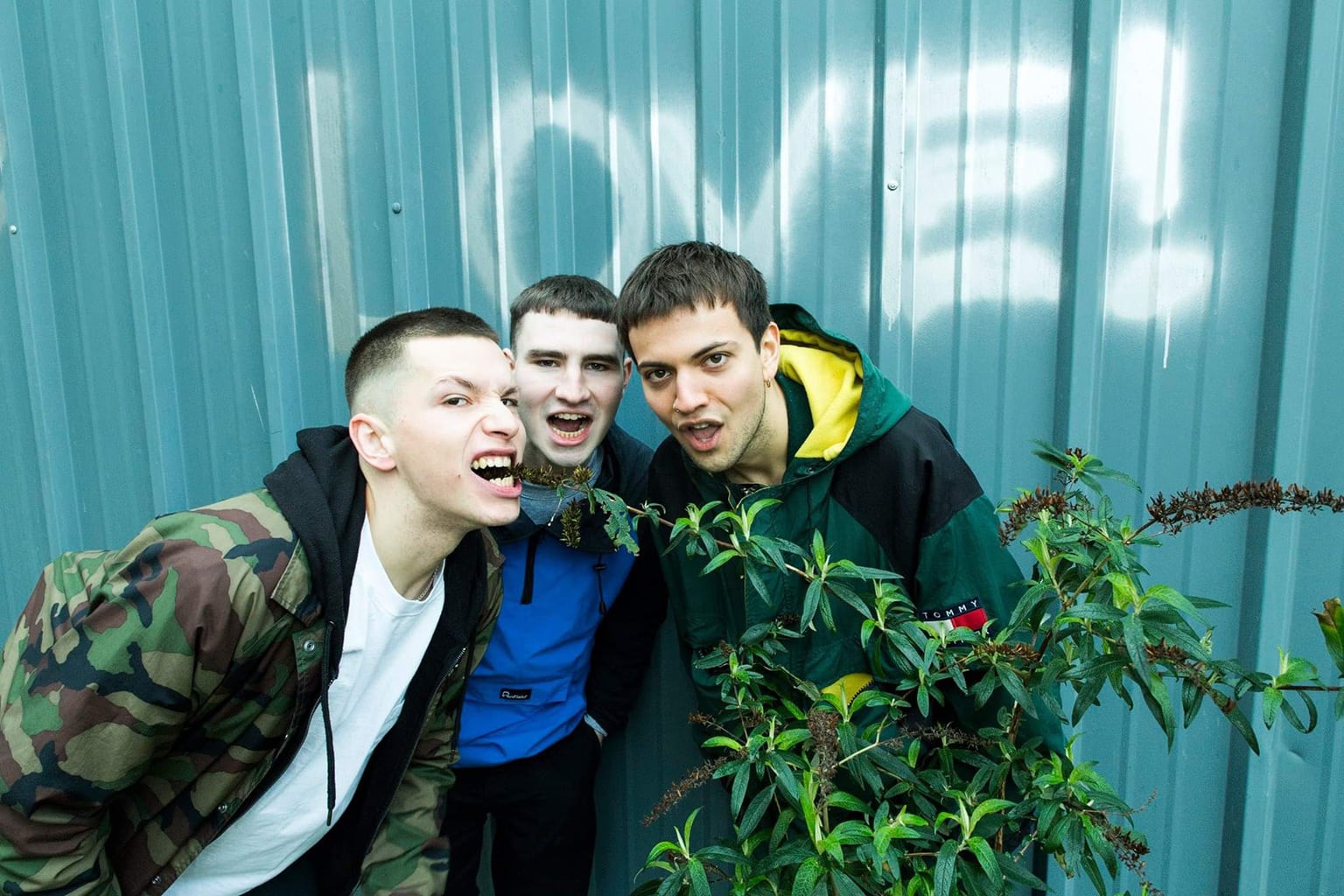 Aerial Salad started as a dream, that turned into a nightmare, that thankfully worked out a dream. Conceived by frontman and guitarist Jamie Munro after he’d attended legendary punk event The FEST in Gainesville, Florida in 2016, the young Manchester Uni student was so inspired and impressed by what he’d witnessed at the festival, he had to start a band. He HAD to play that festival.

“It was a very important time in my young age,” remembers Jamie. “I was like, ‘fuck me, all these people, all these bands are small punk bands, but they’re playing here and they’re all on tour, this is fucking sick this!’ Fuck uni, I hate uni, I’ll start a band. We’ll play The FEST.”

And while for many, those dreams would have remained a fantasy as the daily grind of real life tightened its grip, choking out those young teenage dreams, Jamie Munro did form a band with two best friends (Mike Wimbleton – bass/vocals, Matty Mills – drums) and he did play The FEST, but as is so often in life, things did not go as planned.

In the run-up to what is now billed in their minds as ‘The Worst Festival Set Of All Time’, the fledgling Aerial Salad recorded a couple of scrappy digital EPs, played a small handful of gigs and through sheer bluster and confidence, somehow blagged themselves onto The FEST. However, bad luck, over-indulgence, technical difficulties and unfamiliar equipment led to a catastrophic performance that made sure the band were never invited back. “The set was so bad that as soon as it finished, I had to run out of the  venue, hide around the corner and cry,” shudders Jamie.

Returning home with dreams momentarily shattered, the rag-tag bunch of teenagers may not have found acclaim, but they did find purpose, regrouped and forged ahead. Luck was on their side when they met former Flying Medallions frontman and Wonk Unit leader Alex Johnson who, so taken with the bands spirit and vibe, offered to mentor, manage and help put out Aerial Salad’s debut album – 2017’s ‘Roach’ – on his label Plasterer. He became ‘Daddy Wonk’ to the band and finally finding their stride in ‘Roach’, a sound and boldness started to emerge that  quickly turned heads in the UK punk scene. An album of soaring punk songs, with melody and brash, rough edges that made it fizzle with excitement. The germ of greatness was sown in ‘Roach’. Wonk Unit took them on a three-week tour (“effectively a four year training course on how to actually be a band,”) and Aerial Salad were one step closer to being ready to deliver what the world is about to hear in new album ‘Dirt Mall’.

Armed with a headful of new songs, under the guidance of Daddy Wonk and the production of UK recording legend Paul Tipler (“because he’d recorded ‘Mush’ by Leatherface, which we love,”), Aerial Salad have delivered nine songs of anthemic, driving punk rock that roars with disgust, yet equally joy, at the world around them. Released this coming March 27th  via the bands own Roach Industries, and once again with the help of Plasterer, ‘Dirt Mall’ is the sound of the once rag-tag teenagers finding their sound, feet and minds, frustrated by day jobs, brexshit and the world swirling around them.

“It captures everything I’ve seen working as a temp in offices and generally being in my twenties trying to work myself and the world out. With some pop songs thrown in for fun,” admits Jamie, and it is all of that and more. Bristling with energy and passion, each and every song means something. From the charging title track (“people should not have to try and survive life,”), the bass and drum groove and explosive chorus of ‘Such A Pity’ (“about being young and a fucking arsehole,”), the cathartic strut of ‘Stressed’ (“the Tories are basically trying to kill us, that’s the cut and dry,”) and first single ‘Romance?’ (“a song about wanting romance with someone who is otherwise romantically engaged,”), ‘Dirt Mall’ is an album by three best mates, experiencing this life together, and taking it on.

Aerial Salad is starting its most exciting chapter.

The album will be available in two vinyl formats, 200 copies in dark blue and 300 in traditional black. Each copy will come with a CD copy for your digital pleasure.

Catch Aerial Salad live on tour in the UK this April with Californian punks Decent Criminal at the following dates: