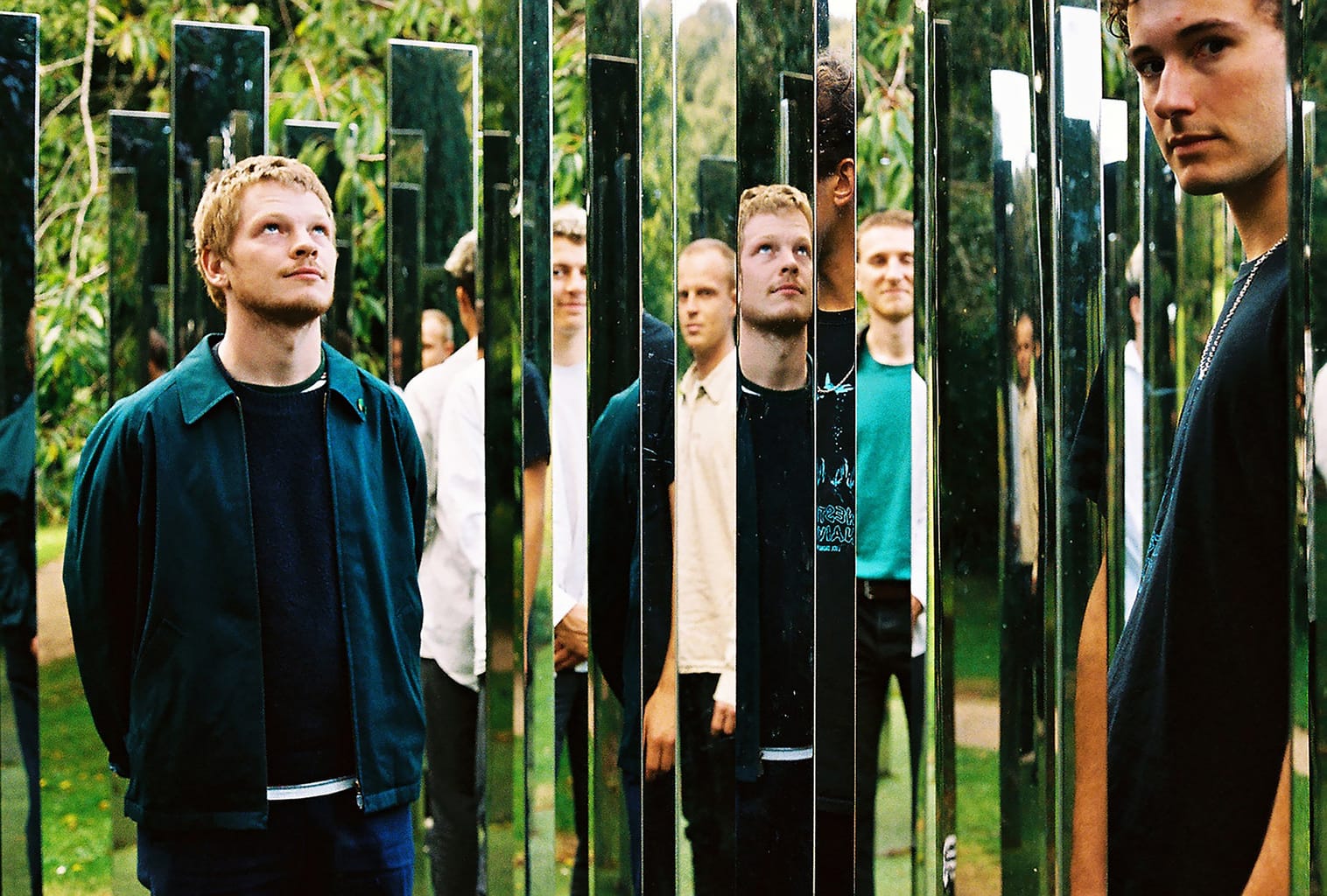 SQUID are thrilled to announce their debut album, BRIGHT GREEN FIELD, already one of 2021’s most highly anticipated albums. BRIGHT GREEN FIELD, produced by Dan Carey, will be released on 7 May via Warp Records. Alongside this news the band release NARRATOR, the first single lifted from the album, which ricochets from funk strut to screeching chaos via the melodic touch of guest vocalist MARTHA SKYE MURPHY. Watch the first ever official SQUID video for NARRATOR, directed by Felix Green, here:

SQUID on the single: “Narrator was inspired by the 2019 film A Long Day’s Journey into Night. The song follows a man who is losing the distinction between memory, dream and reality, and how you can often mould your memories of people to fit a narrative that benefits your ego. Martha Skye Murphy, the track’s guest vocalist, made the point that the unreliable narrator is, more often than not, a male who wishes to portray women as submissive characters in their story. After some discussions with Martha, she thought it would be a good idea that she plays the part of the woman wanting to break free from the dominating story the male has set.”

FELIX GREEN on the video:

“I had wanted to make a video about the virtual creation process for some time. For example, showing the components and processes behind virtual environment construction and looking closely at those small rocks, pieces of terrain and chunks of regolith that slot together to build something bigger. I often think this ‘behind the digital curtain’ part of 3D design looks more interesting than the final finished product since it conveys a process and an authorship. When I was approached to pitch on Squid’s single Narrator, I immediately thought it could be the perfect match for this very visual idea. After talking with the band, it became clear we were on similar wavelengths creatively and aesthetically and the whole creative process flowed very smoothly from start to finish.”

BRIGHT GREEN FIELD is an album of towering scope and ambition, it is deeply considered, paced and intricately constructed. With all band members playing such a vital and equal role, the album is very much the product of five heads operating as one.

Some bands might be tempted to include previous singles on their debut – the band had released two more in 2020 via SLUDGE and BROADCASTER – but instead BRIGHT GREEN FIELD is completely new. This sense of limitlessness and perpetual forward motion is one of the key ingredients that makes SQUID so loved by fans and critics alike, from BBC Radio 6 Music, who have A-listed previous singles MATCH BET, THE CLEANER and HOUSEPLANTS, to publications such as The Guardian, NME, The Face, The Quietus and countless others. The band was also on the longlist for the BBC Music Sound Of 2020 Poll.

BRIGHT GREEN FIELD features field recordings of ringing church bells, tooting bees, microphones swinging from the ceiling orbiting a room of guitar amps, a distorted choir of 30 voices, as well as a horn and string ensemble featuring the likes of Emma-Jean Thackray and Lewis Evans from Black Country, New Road. Whilst the album title conjures up imagery of pastoral England, in reality it’s something of a decoy that captures the band’s fondness for paradox and juxtaposition. Within the geography of BRIGHT GREEN FIELD lies monolithic concrete buildings and dystopian visions plucked from imagined cities.

SQUID’s music – be it agitated and discordant or groove-locked and flowing – has often reflected the tumultuous world we live in and BRIGHT GREEN FIELD continues that to some extent. “This album has created an imaginary cityscape,” says Ollie Judge, who writes the majority of the lyrics and plays drums. “The tracks illustrate the places, events and architecture that exist within it. Previous projects were playful and concerned with characters, whereas this project is darker and more concerned with place – the emotional depth of the music has deepened.”

These themes were further embedded and emphasised, almost serendipitously, as Judge began to read more. “Reading Douglas Coupland’s view that we’re living in the ‘Extreme Present,’ as well as Mark Fisher and Merlin Coverley’s writings on Hauntology and the slow cancellation of the future, made me realise we’ve been living in a dystopian and futuristic landscape for a long time.”

However, for all the innovative recording techniques, evolutionary leaps, lyrical themes, ideas and narratives that underpin the album, it’s also a joyous and emphatic record. One that marries the uncertainties of the world with a curious sense of exploration as it endlessly twists and turns down unpredictable avenues.

Formed in Brighton SQUID is the brainchild of: