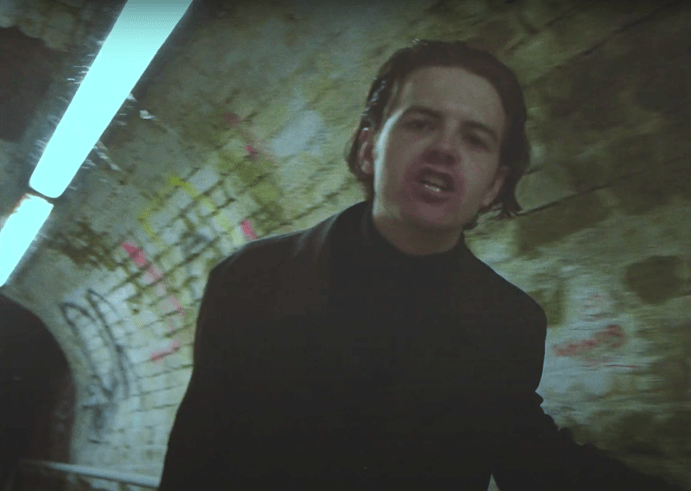 The Blinders have shared their new single, ‘Mule Track’, the latest to be taken from their upcoming album Fantasies Of A Stay At Home Psychopath, out on July 17th via Modern Sky UK. The track premiered with Steve Lamacq on BBC 6Music yesterday, and features in Spotify’s New Music Friday playlist today.

A brooding blend of driving guitars and distorted vocals, the track weaves between explosive crescendos of volatile intensity and woozy passages which plunge into a dark and ethereal ambience, before igniting once again with vitriolic intent. The band have also shared the video for the single; a dark and surreal representation of the track’s intention which matches its raw, frenetic energy.

The band explain; “‘Mule Track’ was initially inspired by the painting of the same name, exhibited in the Imperial War Museum, which depicts a Mule train making its way through a battlefield, as well as being influenced by the artwork ‘The Garden of Earthly Delights.’

“The idea being explored is really that hell or versions of hell/heaven clearly exist within the world. It’s rejecting the simplistic notion or stereotype that heaven is above, hell is below and we all operate in this middle layer with the aim being to get to the higher level. ‘The Mule Track’ – the artwork – can’t help but instil the notion that what is being depicted is some sort of hell on earth.”

The new single follows the release of ‘Lunatic (With A Loaded Gun)’, a fiery anthem of defiance against political and social injustices, and ‘40 Days And Forty Nights’, which like the debut single ‘Circle Song’, was playlisted at BBC 6Music in addition to receiving extensive support from Huw Stephens and Jack Saunders at Radio 1 and John Kennedy at Radio X.


The band have also shared the second episode of their Fantasies Of A Stay At Home Psychopath series, which takes a deeper look into their minds, day to day lives, and how they are remaining creative during this challenging time. Titled ‘Giant Steps’, you can watch it here.

Lead singer and guitarist Thomas Haywood has also been busy recording sessions from home. Showcasing their eclectic influences, they include performances of Tom Waits’ ‘Martha’, Oasis’ ‘Half The World Away’ and a beautifully moving cover of the 19th Century American folk song ‘Cotton Eyed Joe’.

More sessions are being released on the band’s Facebook page over the coming weeks which will include further intriguing cover versions, as well as forthcoming album tracks. In addition, Thomas recently performed live stream shows as part of Liverpool Sound City’s Stay At Home Festival and Dork’s Homeschool Festival.

The follow-up to their critically acclaimed debut album, Columbia, released in 2018, Fantasies of A Stay At Home Psychopath explores existential despair, mental health and society’s ills in a time of planetary crisis, and is both a riposte to, and commentary on, the rise of populist ideology. The album was recorded at Manchester’s Eve Studios alongside producer Rob Ellis (PJ Harvey, Anna Calvi), and mixed by Adrian Bushby (Foo Fighters, Muse).

Delivering a blistering collection of powerful tracks the new album is imbued with the visceral energy of IDLES, the twisted melodies of solo-era Lennon and the darkness of the Bad Seeds.

In September, the band will be heading out on a UK headline tour, including shows in Edinburgh, Leicester, Preston, Hull, Southampton, and a date at London’s iconic 100 Club. The dates have been rescheduled from their original tour in May.

In the shadow of Brexit, the climate crisis and the global pandemic, The Blinders deliver their unique brand of outspoken anthemicism in a sensational album, designed to rouse awareness and inject vital energy into a bleak 2020. Combined with their blistering live energy, get ready for The Blinders to accelerate furiously into the limelight.

In this article:new single, Post punk, The Blinders, Video