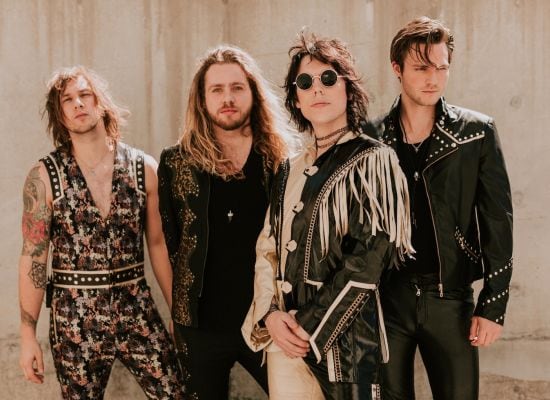 Swaggering glam rockers The Struts have announced a European headline tour in October, including eight UK dates. Kicking off in Manchester on the 11th, the run features a stop at London’s O2 Forum before the band play a further seven dates in Europe.

Singer Luke Spiller comments:“Ladies and Gentlemen, we are very excited to announce these additional dates for our Young & Dangerous 2019 Tour. It’s going to be a collection of shows that will no doubt be our greatest yet, so be sure to get your tickets as soon as you can. We can’t wait to see you all very soon. Love you all. x”

The announcement follows the band’s triumphant, sold-out UK tour in February which saw them garlanded with incredible live reviews from the likes of The Guardian (who awarded them 5/5), Kerrang, Record Collector, Classic Rock and more.

Following the initial date in Manchester, the tour will see the band deliver their attitude-drenched exuberance at shows in Edinburgh, Sheffield, Norwich, London, Cardiff, Leicester and Bournemouth.

Earlier this month, the band released the lyric video for the stadium-sized ‘In Love With A Camera’, the latest track to be taken from their recently released second album, YOUNG&DANGEROUS, which has been universally acclaimed on both sides of the Atlantic. Praise includes The Washington Times’ proclamation of them as“the best rock ‘n’ roll band of the 21st century.”

In just a few years, The Struts have found themselves embraced by some of the greatest icons in rock-and-roll history. Along with supporting The Rolling Stones, The Who and Guns N’ Roses, Dave Grohl has been effusive with praise hailing them as the best band to ever open for Foo Fighters.