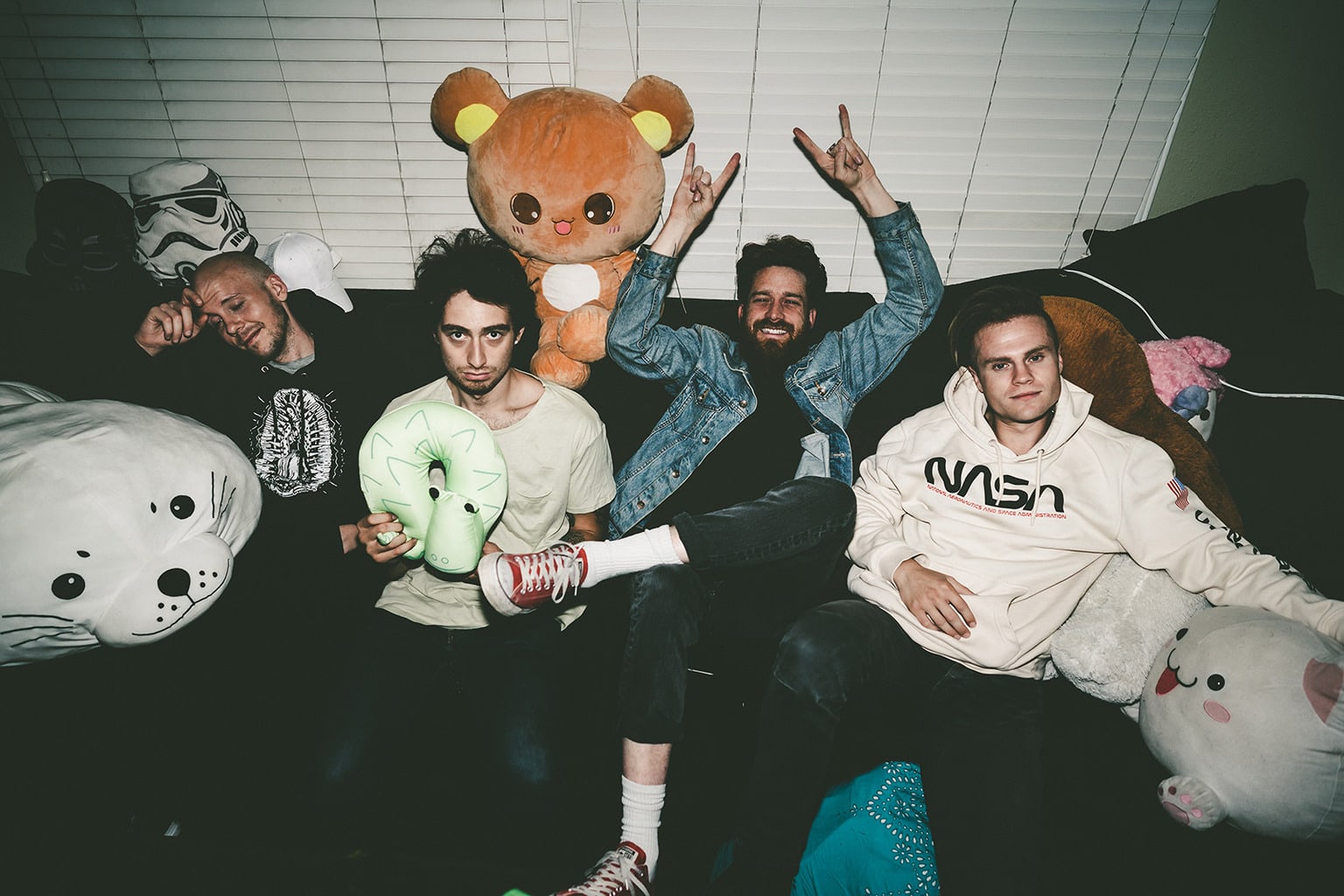 Los Angeles based Dead Poet Society play intriguingly varied alt-rock. Their enigmatically titled album -!- is released on the 12th March 2021. If your local restrictions permit asking for it in a record store, it’s apparently said as “The Exclamation Album.”

The band’s trump card is the impressive range of vocalist Jack Underkofler, switching effortlessly between screaming intensity and a pleasing falsetto. He clearly knows his way around a fretboard too, combining with fellow guitarist Jack Collins to create an eclectic and expansive sonic landscape. Between them, they utilise an impressive array of effects, alternative tunings and plenty of fancy finger work. Bassist Dylan Brenner and drummer Will Goodroad play hard and tight, punctuating the music’s wildly fluctuating moods with pin-sharp stops and juddering stabs.

If the band name (“Poet” singular, I note) has you expecting something lyrically highbrow, you can climb down off your desk now. There may be subtleties that have eluded me, but for the most part, it’s straightforward angst of relationships gone wrong. The band’s strength lies in their sound and energy. If you’re looking for something more outré, check out the punctuation, spacing and capitalisation of the song titles.

After a brief spoken-word piece discussing rock bands’ sartorial expectations, we’re into an absolutely spellbinding instrumental introduction: “.futureofwar.” Beginning with bass and guitar notes that resonate like a foghorn, it steadily expands with heavy riffs offset by intricate percussion, spacey effects and a delightful motif of scratchy treble notes. Superb!

“.burymewhole.” opens with a bluesy guitar and vocal reminiscent of Jack White. The rest of the band come in with the momentum of a freight train, and the boiler is further stoked by a jarring change of rhythm and some blistering lead. There’s interesting guitar work too in “.getawayfortheweekend.”, though the vocal harmonies seem to leave a trail of breadcrumbs back to mainstream rock, just in case we venture too far into the forest.

The high vocals really shine in “.AmericanBlood.”, which flits gracefully between subtle undertones and hard strummed intensity. The lead single for the album, “.intoodeep. “has a vocal melody that wouldn’t seem out of place in contemporary chart pop, underpinned by some earth-shaking whole band stabs. “.georgia.” is a stunning track; its mesmeric riff wound around a tricky sounding rhythm.

After another spoken interlude, we’re into the second half of the album with “I never loved myself like I loved you”, which must be special as the title is accorded gaps between the words. It’s an epic soundscape in the vein of Death Cab For Cutie, the sort of thing you’d imagine listening to in a car traversing a vast American desert landscape. “.SALT.” is angular and experimental, softly played but with a heavy groove and tantalisingly weird guitar sounds. The vocal exudes a quiet menace. To my ears, this is the band at their best.

If the title of second single “.CoDA.” might bring Led Zeppelin to mind, the track certainly does, opening with guitar worthy of Jimmy Page himself. It’s a delightful figure, with flurries of fingerpicked arpeggios and octave pull-offs contrasting with heavier strumming. In the stops, the vocal is given free rein to fly. Current single “.loveyoulikethat.” starts in a similar bluesy classic rock mood but quickly shifts gear to a heavier and more contemporary vibe. The big, effects-laden sound, coupled with a high vocal that smoothly elevates into falsetto, puts me in mind of bands like Muse.

There’s an amusing spoken-word interlude with someone observing that all the songs do the loud/quiet thing. Frankly, this could apply to almost any rock band from the last thirty years.

“.lovemelikeyoudo.” reprises the mood of the opening track, using similar percussive flourishes and industrial guitar effects. It sounds interesting, experimental and current, and works a treat.

“.beenherebefore.” has a more mainstream rock feel, though over a complex rhythm accented by fast and tight snare fills. Final track “.haunted.” is a genuine rock ballad, with lovely acoustic guitar and a floaty vocal. After the previous numbers, I was expecting the drums to come thundering in at some point, but they never do. It just builds slowly and steadily, leading to a beautiful section of ethereal voices and guitar effects. It’s a very satisfying conclusion to the album.

The path of rock is well worn by a lot of history, and it’s a challenge these days to sound fresh. Dead Poet Society definitely has the skill set to achieve this. Their album is a varied and enjoyable listen, especially so when they get off the beaten track and explore the edgier possibilities of the guitar band format.