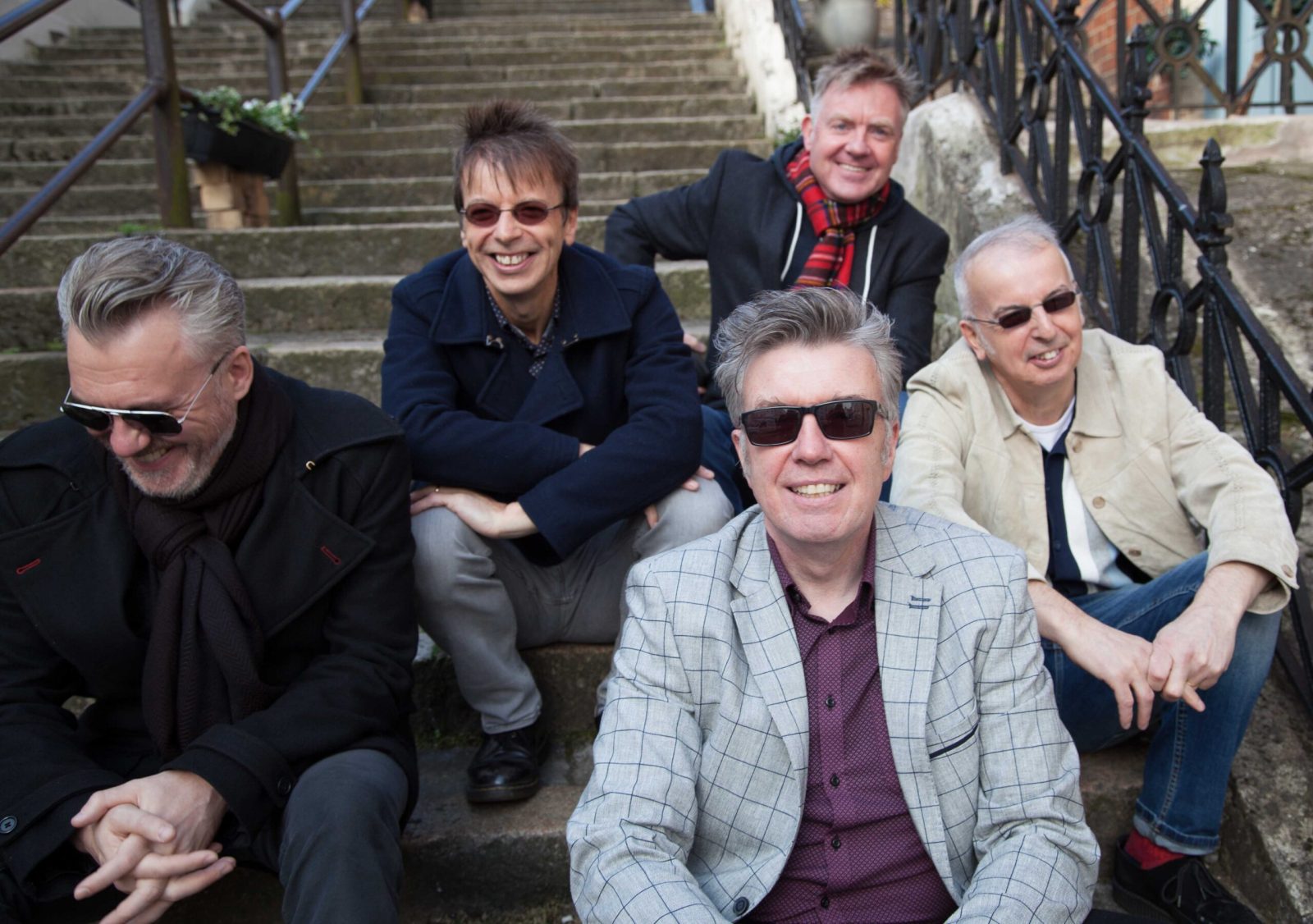 THE UNDERTONES – DIG WHAT YOU NEED

‘Dig What You Need’ is a sparkling re-introduction to the recorded work of pop-rock legends The Undertones since their reformation in 1999 with Paul McLoone on lead vocals. Drawing from studio albums ‘Get What You Need’ (2003) and ‘Dig Yourself Deep’ (2007), this compilation has been remixed by producer Paul Tipler, and sees the tracks released on vinyl for the first time.

Originally formed in Derry in the 1970s, The Undertones need little introduction as one of the best-loved bands to emerge from the punk era. They were famously championed by BBC Radio One DJ John Peel, who funded the initial recording of their ‘Teenage Kicks’ EP and then played it extensively on his show, leading to a deal with Sire Records. The group released four albums and a string of iconic singles including chart hits ‘Jimmy Jimmy’ and ‘My Perfect Cousin’, before splitting in 1983.

Since getting back together, The Undertones continue to be a popular act on the live circuit. This compilation puts the best of their recorded work in the new lineup together into one package. The remix is subtle, without any significant alteration to the band’s trademark sound. It’s a bit brighter overall, with slightly more punch and separation, and the tracks from the two different albums sit together nicely as a sonically cohesive collection.

The songs have that classic feel of the earlier works and are written either by guitarist John O’Neill or bassist Michael Bradley. For the most part, the sound is an urgently punky garage rock, with gloriously poppy vocal and guitar hooks. Having made their name originally with lyrical themes of adolescent angst, it’s a fortunate truth that songs about relationships are broadly universal and still work for all ages.

Compilation opener ‘Thrill Me’ is instantly recognisable as being by The Undertones. With a central motif of thrashed rhythm guitar chords propelled along by thumping floor tom, Paul McLoone’s vocal has the familiar Derry accent and even a hint of the vibrato of his predecessor. It’s a smashing pop song that deserves to be more widely heard. ‘Enough’ utilises an excellent call-and-response figure between backing and lead vocals, and has a marvellously poignant verse line. I get the feeling that either song would have been a hit back in the band’s heyday.

‘Here Comes The Rain’ has become a favourite at live shows. It has a psych feel with the bass moving around underneath naggingly insistent dual guitar riffs, and a touchingly despondent vocal. ‘She’s So Sweet’ is another slice of perfect punky pop, accentuated by a beautifully chiming lead line. The lilting rhythm of ‘Fight My Corner’ provides a bit of variety with some interesting dynamics, whilst ‘You Can’t Say That’ has a shuffling beat underpinning a 1960s groove, complete with what sounds like a jazzy horn wig out in the background. ‘We All Talked About You’ concludes the first side for the vinyl version with a rapid-fire staccato vocal over some urgently thrashy guitar and up-the-neck bass octaves.

Paul’s vocal has plenty of quaver for ‘Oh Please’, which motors along on fast-moving barre chords, whilst ‘Dig Yourself Deep’ is another fantastic piece of pop making good use of all the band’s signature moves and a simply gorgeous progression. ‘Winter Sun’ stands out, being slower and keyboard-led, with lush backing vocals and hints of sitar-like sounds. ‘I Need Your Love The Way It Used To Be’ struts briskly over an infectious garage-rock groove, whilst ‘Joyland’ sounds rich, full and busy, interweaving multiple vocal lines.

‘I’m Recommending Me’ wraps up this fine collection, with a thumping rhythm and yet more wonderfully evocative lead lines.
The popularity of The Undertones as a live act is without question, but their more recent recorded work is worthy of a wider audience too. Hopefully, this compilation will help showcase the continuing quality of material the band has produced. I will certainly be getting myself a vinyl copy, and I’ll look forward to hearing some of these songs played on the next tour. (You can view the full tour dates below)

‘Dig What You Need’, The Best Of The “Reformation Years” 1999 – Present is released on 11th March, on Dimple Discs.

You can read the latest news from The Undertones below

To celebrate the release of The Undertones ‘Dig What You Need’,The Best Of The “Reformation Years 1999 – Present on 11th March, on Dimple Discs,  the band unveil a brand new video for Thrill Me; made by Vinny Cunningham (who also made The Story of the Undertones documentary).

The video was shot in various cities during the band’s German and Irish tours and also includes footage of the band in recording studios in Derry and at BBC’s Maida Vale, where they recorded a session for John Peel.

Possibly one of the greatest pop-rock bands of all time, Derry’s The Undertones have roots that go back 45 years to the 1977 punk explosion when they were beloved and championed by BBC DJ John Peel. Songs like ‘Teenage Kicks’, ‘Get Over You’ and ‘My Perfect Cousin’ are household staples beloved by millions across three generations of music listeners. The band’s reputation as recording artists and a brilliant live act has carried them through the recent two decades since they reformed in 1999 with new singer Paul McLoone. ‘Dig What You Need’ collects the best of their two reformation albums, 2003’s “Get What You Need” and 2007’s “Dig Yourself Deep”. The tracks for this compilation have been digitally remastered and are being released for the first time on vinyl. In addition, all the songs have been remixed by producer Paul Tipler (Stereolab, Elastica, Idlewild, Placebo, Julian Cope, The House Of Love).

Guitarist and founder member Damian O’Neill notes…”So dig this: Thrill Me / Oh Please / I’m Recommending Me / Dig Yourself Deep / Here Comes The Rain  – all firm favourites on an Undertones setlist these days, songs penned by John O¹Neill and Michael Bradley. So it’s a no brainer really that all these songs (and more) should finally be included on a best-of compilation taken from the two albums we’ve recorded withPaul McLoone. Even better is the fact we got producer/mixing maestro Paul Tipler to remix them with fresh ears and make them sound even better than the originals. Add to that the wonderful packaging and sleeve design courtesy of Bruce and Mary from Arthole and lo and behold we have a sonically cohesive bunch of nuggets waiting to be rediscovered all over again. So dig this compilation my friends – you know you won¹t be disappointed”.Since their reformation, the band has toured several times across the UK, Ireland, Continental Europe, Japan, Turkey and North America, with highlights that include Glastonbury and a pre-game performance at Celtic Park in Glasgow before a UEFA Cup play-off between Celtic and Arsenal. The band is much loved in all quarters of the British and Irish music media, with their debut album being voted into the Q Magazine Top 100 albums of all time. The band will spend March – May on the road with gigs across the UK, Germany and Scandinavia.
‘Dig What You Need’ track list
Side One1. Thrill Me2. Enough3. Here Comes The Rain4. She’s So Sweet5. Fight My Corner6. You Can’t say That7. We All Talked About You
Side Two 1. Oh Please2. Dig Yourself Deep3. Winter Sun4. I Need Your Love The Way It Used To Be 5. Joyland6. I’m Recommending Me

The Undertones dates in full:

In this article:Album review, Dig What You Need, punk rock, The Undertones, tour dates