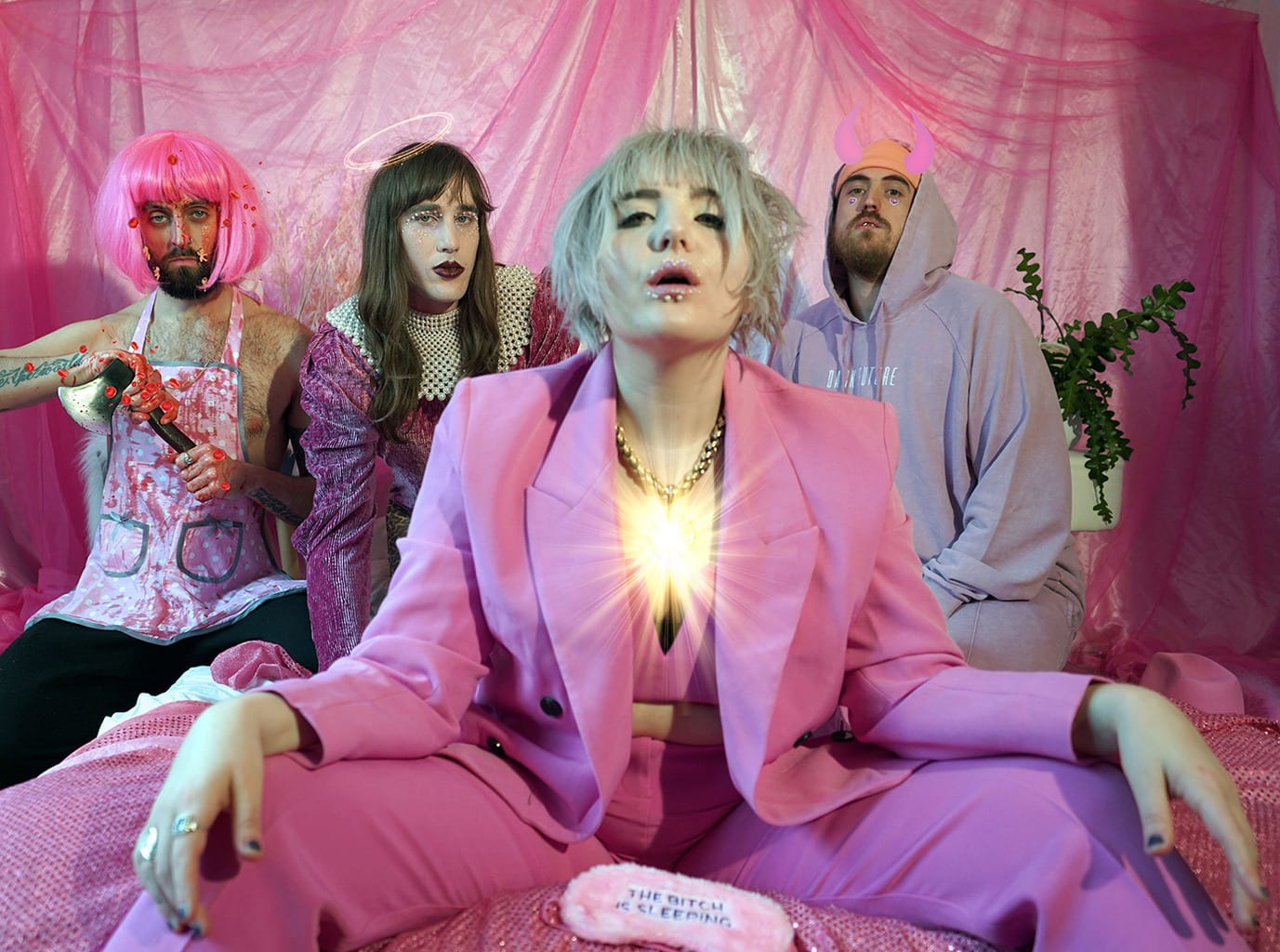 With their neck-snapping rhythm section and adventurous beats; garage punk-infiltrated broken guitars; vocals that veer from searing emotional drama to camp self-parody; and frenetic experimentation entwined with pristine pop hooks – it is impossible to pin a genre on LibraLibra. But it’s not hard to pinpoint the feeling that permeates their music: the feeling that, whatever you’re feeling, it’s ok. It’s enough. You are enough. You are ok.

Returning amidst this crazy messed-up world we currently inhabit, LibraLibra’s dayglo explosions of colour and sound have never felt more vital and needed. On August 14th, the Brighton based band will release a new EP titled ‘Hail Mary’ via their own LibraLibra Records, that features the first results of their recent work with production luminary SPACE. Fresh from birthing two of the most impactful British albums of the last few years with Idles, SPACE was immediately taken with LibraLibra’s vibrant world and invited them into their studio to develop the tracks for the EP.

“SPACE really challenged us on who we are and what we want to say”, says singer and lyricist Beth Cannon. “He delved into asking what kind of world or vision we want to create – what kind of message we are trying to send to the world and our audience.”

Alongside Cannon, LibraLibra are producer and drummer Joe Caple, guitarist Dan Martell, and bassist and keys player Guy Jones. For these four strong characters with passion, musical chops and creativity to spare, SPACE’s insightful perspective and mentorship helped them to identify and double down on their collective identity – turning an exciting musical proposition into a creative force on overdrive, a machine with a mission.

Today we get to hear the first ripe fruits of these sessions in ‘Juicy Lucy’ – a strutting, high-energy blast of righteous indignation that takes aim at perfect life, body beautiful celebrity obsession and the feelings of inadequacy they can generate.

“Have you ever been so utterly disgusted with yourself and you begin to obsess over who you could be?” asks Beth. “You latch on to the media crazed celebrity idols bullshit. You’re young, naive, a slave to their every whim, their perfection, their beauty. They ooze sex appeal, they are heavenly, other worldly – you are a mere mortal, stuck in your flabby stretch mark ridden skin. You want nothing more than to know this star, be side by side, touch it, feel it, consume it, be it. It’s your obsession.”

“The ‘Juicy Lucy’ video is the brainchild of our wonderful friend and director Jay Bartlett,” continues Beth. “The whole concept of the song itself is about obsession and escapism – despising being in your own skin and wanting to be someone else so badly you start to fixate, obsess upon another worldly being, you would even resort to attempting to consume them if it meant some of their radiance might rub off on to your own mundane and wretched being. Jay heard the track and immediately could picture a scene where then band have assumed the identity of wealthy middle-class family, but why, how or when is intentionally left for the viewer to piece together.”

Gaining heavy grassroots support including BBC Introducing, Radio X, Amazing Radio, The 405 and Les InRocks, LibraLibra’s early single releases showcased eclectic influences – from The Knife to Death Grips to Madonna via Tears for Fears and Bowie – alongside a rapacious hunger for new sounds and rhythms. With the release of their first EP in 2020, this attention-grabbing band lift the lid on the musical spoils of their SPACE sessions, freshly galvanised for an exciting new phase.

And the very moment it’s possible, LibraLibra will be right back onstage where they belong, bringing their flamboyant, in-your-face misfit pop to the masses.

In the meantime, the band celebrate ‘Juicy Lucy’ on the day of it’s release with a live streamed Lockdown session show at 6pm on May 29th.