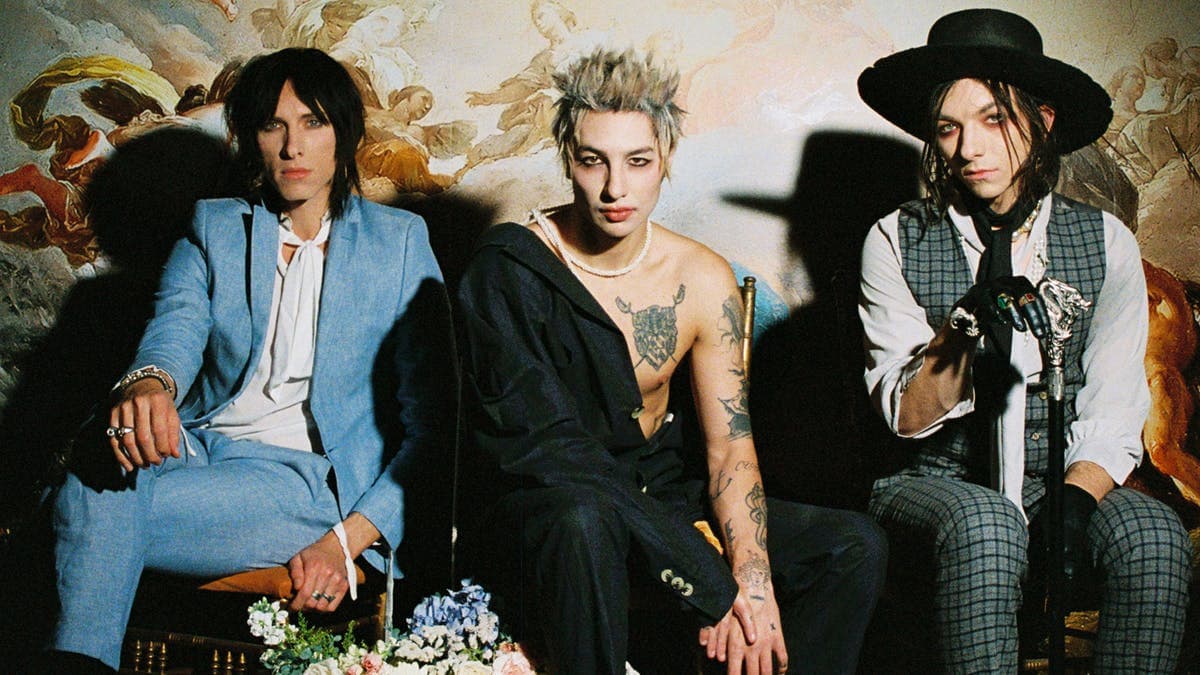 Electrifying trio Palaye Royale has shared two new songs via Sumerian Records. Stream/download “Punching Bag” here and watch the music video here now. Stream/download “No Love in LA” here and watch the music video here (live at 5pm BST). Both are hugely satisfying, adrenaline-fueled tracks that illustrate the band’s sonic evolution and kick off a bold new chapter of their musical journey, with more new music to be unleashed over the coming months.

Palaye Royale are brothers Remington Leith (vocals), Sebastian Danzig (guitar) and Emerson Barrett (drums). Unlike previous projects where the band was on a non-stop whirlwind of touring and travel, the new music was written at home over the pandemic, giving them room to focus and flex their creative muscles.

“No Love in LA” is playful and catchy, with an infectious hook and good-natured examination of superficial life and stereotypes in the city the band calls home. The chorus repeats, “There is no such thing as love in LA, plastic people don’t got nothing to say. They’re judging me, I’m judging you we ain’t got nothing else to do, there’s no such thing as love in LA.” The track was penned by the band and Chris Greatti, with GRAMMY-nominated Greatti also producing. He most recently worked with Machine Gun Kelly, YUNGBLUD and Grimes + Poppy. The video was directed by Matt Vorce and Padraig Reynolds, and bursts with color, decadence and debauchery. The band romps through a non-stop party that moves through a private jet, and gothic mansion, and also sees Remington floating in a pool flanked by synchronized swimmers donning full make-up, fishnets and boots.

“Punching Bag” was written by Palaye Royale, along with singer Phem and Greatti, with Greatti again producing. The arresting track and video share haunting, raw and dark qualities. Lyrically, “Punching Bag” can be interpreted in many ways, with themes of exploitation, scapegoating and frustration heard as Remington sings, “go on, make my day, go get high on my mistakes. Give me more complaints you’re real, I’m just a fake. I wake up, I’m so glad I can be your punching bag.” The video was also directed by Vorce and Padraig Reynolds. Throughout the visually striking clip, Remington is seen fighting his way through a crowd, where he eventually makes it to the stage with his bandmates only to be tied up in a chair, while Sebastian and Emerson continue to thrash away on their instruments.

Discussing the new music the band comments, “Truth, honesty and angst is what we aimed to capture collectively as a band throughout this writing process. We found a new appreciation for one another during this recording process, becoming more accepting of our past and more satisfied with our present because of the art we created in what we feel is our most important music we’ve released to date.”

They continue, “Palaye Royale has always been about pushing boundaries, and on ‘Punching Bag’ and ‘No Love In LA’ we’ve gone beyond what we ever thought possible musically and lyrically by putting faith in each other, trusting our instincts and allowing real creative freedom to ourselves and our producer, Chris Greatti. It is with massive excitement and feelings of triumph that we raise the curtain on what is most certainly our boldest era yet. We hope you’re ready for the journey.”

Palaye Royale has earned a legion of obsessive cult-like loyalists, amassing over 344 million streams, 30 million+ YouTube views and 1.5 million monthly Spotify listeners. The band brought the juxtaposition of the glitz and grime of their teenage years spent in Las Vegas, when they relocated to Los Angeles in 2011. By the time they hit the road, borrowing their mother’s Cadillac Escalade, Remington, Sebastian and Emerson were a tightly wound creative force. (Not long ago, they slept in that SUV outside a Motel 6, unable to afford to rent a room.) Alex Burdon, daughter of The Animals singer Eric Burdon, insisted Sumerian’s founder see the band, and they were offered a contract that same night. James Iha of The Smashing Pumpkins/A Perfect Circle and Corey Taylor of Slipknot/Stone Sour count themselves among the band’s true believers, having worked with them as a producer and taken them out on tour, respectively. As their moniker itself evokes (Palaye Royale is the name of the Toronto dancehall where their grandparents met in the ‘50s), the trio is eager to connect themselves and this generation to the spirit of the past, but reinvigorated for today with eclecticism and fierce individuality. The band’s visual flair and fierce musical chops continue to make for an unstoppable upward trajectory in 2021.