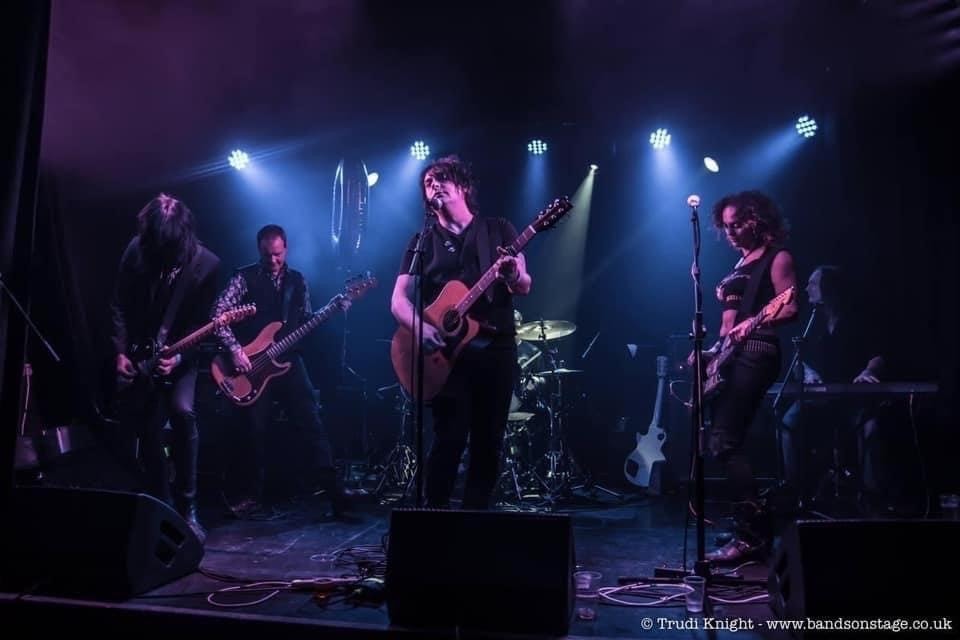 Fronted by former Role Models leader Rich Ragany, the last few years has seen the Calgary, Canada-born and now UK-based songsmith build up quite a reputation with his band of rock n ’roll trailblazers, The Digressions. With musicians that include Andy Brook (celebrated producer, SHUSH), Gaff (Glitterati, Dedwardians, Desperate Measures,) Ricky McGuire (UK SUBS, The Men They Couldn’t Hang), Simon Maxwell (Role Models, Yo Yos) and Kit Swing (Mallory Knox, Seven Days And Doesn’t Die), the band won over the hearts of many in 2021 with their critically-acclaimed ‘Beyond Nostalgia & Heartache’ album, gaining considerable airplay on BBC Introducing, and rave reviews and features from the likes of Classic Rock, Vive Le Rock, Louder Than War and Powerplay etc.

Sharing stages with the likes of The Lemonheads, Warrior Soul, The Men They Couldn’t Hang, Whitfield Crane, Ginger Wildheart, The Professionals, Steve Conte (New York Dolls) as well as packing out London venues in their own right, all this deserved attention has led to the band signing a deal with Barrel And Squidger (who have released music by CJ Wildheart, Massive Wagons, members of Status Quo and Sex Pistols) and are set to return March 3rd with a brand new album titled ‘What We Do (To Not Let Go)’.
Today, the band have launched the pre-order for the album (available here) and are giving people the first sweet taste of its charms in ‘One Last Thing To Prove’ – a song that lulls the listener into a false sense of security with a beautiful piano and simple chord refrain before out of nowhere the Digressions kick in with a Stooges worthy rock n’ roll riff, complete with ‘Raw Power’ one-note piano stabs. But the vocal harmonies that the band are renowned for lift the song far beyond any low rent garage vibes, and the song soars.
“One night out in Camden I ran into an old friend Pete,” explains Rich, remembering the origins of the song. “We go way back to Canada He’s a sound tech for some pretty amazing acts. Anyways, I see him, and his arm is in a sling. I ask him what he’s doing after. He says he can’t be out late as he leaves in the morning to hit the road. “With a broken arm man??” He replied “We all got one last thing to prove…”
Listen to ‘One Last Thing To Prove’ HERE:
It’s a taster of an album that is crammed full of soaring melodies and the kind of rock n’ roll that can take on many different moods, sounds and styles. For ‘What We Do (To Not Let Go)’ that band went for a different approach to its predecessor…
“As ‘Nostalgia….’ had that wide-screen depth and cinematic feel,” explains Rich. “I decided to lay down a new approach. Gone were layering guitars and keys, in with punchy one takes… everyone getting one shot… everybody gets one job (Gaff is lead guitar, Kit rhythm for example no layers… just the parts), solos are solid takes and not pieced together. This to me would ensure that everyone’s personality would shine right through while making the songs far more immediate and vital. If it’s one thing I’ve learned while being incredibly lucky to work with the Digressions, it’s that they have a ton of personality.
“After writing, recording our ‘Beyond Nostalgia And Heartache’ album through the pandemic I felt we were on an incredible creative roll. So just before the release of Nostalgia I booked time again with Andy at The Brook Studios in Wallington Rock City. I had the songs and the band had grown into something very special. We had to keep going, which felt natural. What you get is a muscular yet melodic, anthemic rock n roll album. A new way of telling our story. One I can say I am so proud to be part of.”
‘What We Do (To Not Let Go)’ is out March 3rd via Barrel and Squidger Records and is available to pre-order HERE.
Album release parties are confirmed for March 3rd at The Parish in Huddersfield and March 4th at The Camden Assembly in London.
Also, the band have just secured the main support slot on The Southall Lawless Stage of The Call Of The Wild Festival on May 27th. More dates across the country are being added.

In this article:Hard Rock, new album, Rich Ragany and the Digressions, What We Do (To Not Let Go)